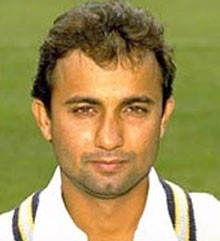 Nayan Mongia full name is Nayan Ramlal Mongia is a famous Indian cricketer, who was born on the 19th of December 19 1969 in Vadodara.

Nayan Mongia fame was from 1994 till 2004 when he played as a right handed batsman and wicketkeeper.

During his peak years he was the number one choice for wicketkeeper, Nayan Mongia retired in the year 2004.

Help us improve this page:   Correct or update the Nayan Mongia page