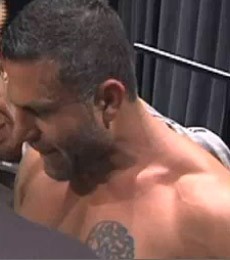 Mohammed Ali is a Lebanese Boxer and Cage Fighter Champion in England for 2011.

Mohammed Ali or Mohammad Ali, not to be confused with the American legend Muhammad Ali, became famous (and a controversial name) when he raised a Hezbollah's flag after winning against Scott Stribbling by TKO (Punches) at the CFC - Cage Fighters Championship on 9/24/2011 at the Brentwood Center in the UK.

Mohammed Ali's assisting trainer Ali Badreddine, explained on Lel Nasher with Tony Khalifeh that the incident was not premeditated, and that the flag was given to him in a spontaneous fashion after the win by one of the Lebanese supporters watching the fight...The boxer was then personally invited to the show where he explained that although he is a supporter of the resistance, he wasn't aware of the nature of the flag he was swirling around in the air after the fight; actually his club's flag is mostly yellow and quite similar to that of the Hezb, thus the confusion.

On the 3rd of December 2011, Mohammed Ali won his final fight which crowned him Champion in the UK.