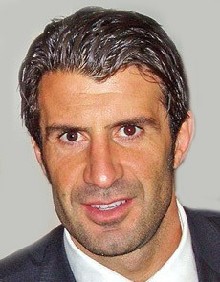 Luis Figo is a former football player from Portugal with a career of 20 years. Luis Figo was born on the 4th of November 1972.

His full name is Luís Filipe Madeira Caeiro.
Luis Figo was known as the mid-field player for the Sporting Club of Portugal, Barcelona.

He was also a player with Real Madrid and Internazionale.

On the 31st of May 2009, Luis Figo decided to retire from playing football after twenty years.

During his career Figo won 127 caps for the Portuguese national football team.

Luis was one of the top 100 FIFA players.

Help us improve this page:   Correct or update the Luis Figo page