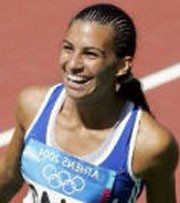 Gretta Teslakian also known as Gretta Taslakian was born on the 16th of August 1985 in Ghadir, Lebanon.

Gretta Taslakian won two gold medals in the Pan Arab Games which took place in Egypt during the year 2007.

Gretta played in the Olympic Games of 2008 and represented Lebanon, unfortunatly she was not qualified for the second round.

Help us improve this page:   Correct or update the Gretta Taslakian page