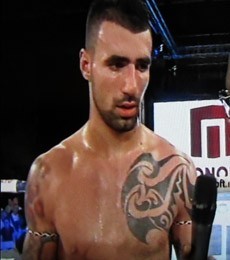 Bogdan Stoica was born on January the 28th 1990, and is the younger brother of Andrei Stoica.

Bogdan Stoica is a Cruiserweight fighter. He has won many times in the Local Kombat and SuperKombat.

Like his brother, he is very efficient with his kicks, and is known to wear shorts with extra slits on his shorts for better movement. He is especially known for the axe-kick, a kick that comes from above and down onto the opponent's head.

Bogdan Stoica has taken part and won many times in the SuperKombat event (based in Bucharest).

Help us improve this page:   Correct or update the Bogdan Stoica page