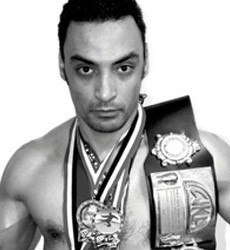 Ahmed Fahim is an Egyptian Kickboxing Champion based in the USA, and a certified personal trainer.

Ahmed Fahim, Alias The Egyptian Tiger, was born in al Mansoura, Egypt. He studied sports science and earned a bachelor degree in physical education from Alexandria University in 2003.

The WKA then invited him to participate in a pro Maui Thai Match in New York, which was the beginning of his career as professional kick boxer in the United States. He won his first pro title, the New York state pro middle weight title full contact 72 kg in 2008, and a year later defended it. In 2010, Fahim also became k1 World Champion in kickboxing.

Help us improve this page:   Correct or update the Ahmed Fahim page