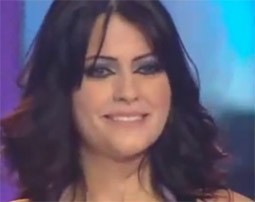 What a complete travesty the World Bellydance Championship has turned out to be this year; an exponential down slope from last season!

It gradually became apparent that one of the Lebanese participants, Magalie, had very strong contacts and enjoyed a questionable conviviality with the organizers, the jury and perhaps more specifically with the director Simon Asmar.

All through the program, this beautiful yet inexperienced, tentative, somewhat mediocre dancer received exaggerated encouragements and misplaced flatteries, at the expense of other more talented contestants, and to our complete dismay. This is utter disrespect in regards to the viewers, who theoretically possess enough common sense and critical judgment to detect this farce. Blunt rudeness has really reached unprecedented levels! Although there were many other brilliant foreign dancers, our attention was drawn to yet another Lebanese dancer by the name of Eleanor (especially because of what happened later on).

This energetic creature seduced the public with such great passion and beauty, that she sparkled right away from her very first appearance. This devilish temptress however was packaged with a stubborn egotistical personality, which frankly added to her overall charm, in a way. Just like women are into bad boys, well men are into arrogant, opinionated women. Ask us, we know such things :) This was manipulated into portraying her as the villain. Her performances were therefore often discredited and disparaged on purpose.

It wasn’t long before a rigid rivalry settled in between these two competitors.

A beginner backed by the organizers vs. a confident belly dancer enraged by the jury’s unprofessional inclinations. The show couldn’t overlook this rampant situation, and decided to further invest into this, hoping to attract more viewers. The crew went on as far as to deliberately undermine one of Eleanor’s choreographies, by changing the agreed upon music during her performance! The infuriated dancer abruptly halted her performance, in protestation. Naturally, this also was used against her!

Another funny observation was the artificially prolonged stay of the Egyptian dancer, who seemed completely clueless about belly dancing.(Most probably to ensure high viewing rates till the very end of the show.)

After they gradually got rid of all the European dancers who showed strong potential(and probably deserved the title much more), Mona, the Syrian participant, finally decided to withdraw her membership from what seemed to be a show created to launch the career of a wannabe belly dancer.

The highlight of the program was the duet that opposed Magalie to Eleanor in the final prime. This head to head confrontation was the straw that broke the camel’s back. While Eleanor was shaking with grace and beauty, her confused counterpart was wiggling like a slaughtered chicken exhaling its last breath! Of course, the jury was enchanted by its favored candidate as usual. When Magalie was crowned Belly dancer of the year, Eleanor shed tears like a baby. Well dear, smile you are Lebanese ;)

The only positive aspect of this masquerade was the impressive performance by last season’s winner Estelle, on the first prime. This was truly a precious finding from Costa Rica!

Help us improve this page:   Correct or update the World Bellydance Joke ! page