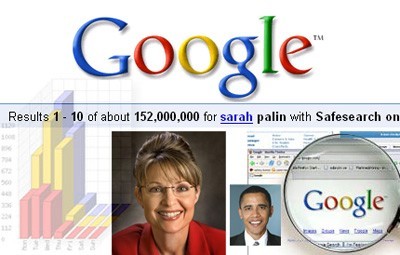 It seems that Sarah Palin is not just the Television and Magazine celebrity of the summer of 2008. A Quick search for the keyword (Sarah Palin) on Google resulted in more than 150 million results. This by far exceeds John McCain and Barack Obama himself who resulted in 50+ million pages only.

It is worth mentioning that Britney Spears (keyword) search results gave 39 million pages, so you can imagine how popular Sarah Palin has become in a period of less than 1 month.

Here are results of our findings as per google search results. The results are based on a search made on the 19th of Sept 2008 using Safe search set to ON.