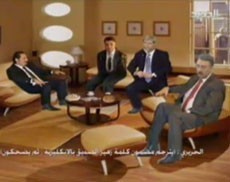 If proved to be authentic, this could be the last straw that would officially discredit the already controversial and politicized investigation for the Hariri Tribunal.

Hariri has so far maintained he knows nothing of Mohammed Zuhair Siddiq & the rest of the false witnesses. The voice recording aired on New Tv features Siddiq who appears to be directing Hariri in the plot, while Wissam Hassan comes across as a manipulator of the other two.

It is believed the leak could have been provided by Wissam Hassan himself to Gen. Rustom Ghazleh.

The team in charge of the investigation for the international tribunal, along with Hariri and his aids have seemingly compromised its integrity and are far from being objective about the truth. This also further indicates that the matter is a mere Hariri/Saudi/American plot to frame their political opponents in Lebanon and the region (mainly the Lebanese resistance), despite the risks of a civil war in Lebanon.

The opposition maintains the special tribunal for Lebanon is politicized. Hariri is not fit to head the government, and his team cannot be entrusted on the future of Lebanon. Hariri and his team are intentionally misleading justice.

In more details:
The taped meeting took place between Saad al-Hariri, Information Branch chief Colonel Wissam al-Hassan, STL deputy chief investigator Gerhard Lehmann, and Muhammad Zuhair al-Siddiq, one of the false witnesses whose testimony was used by Mehlis to accuse Syria for plotting the murder of Rafiq al-Hariri. It records the four men laying out a plan for how to convince the international community of Syria’s culpability. They agree that they must present the world with convincing proof. Saddiq explains to Hariri that he tried to warn him of May Shidiyyaq’s attempted assassination tow days ahead of time, but claims Hariri refused to answer it. Hariri asks Saddiq why he didn’t text him. Hariri calls Saddiq a “diarrhea mouth” to Mehlis’s lieutenant, but goes on to explain that he should be believed and is trustworthy. This is damaging to the Tribunal and Hariri because it shows how tainted Mehlis’ reports were and how eager the European investigators were to take at face value trumped up evidence. For Hariri, it is damaging because he swore that he had not met with Saddiq or any of the false witnesses.