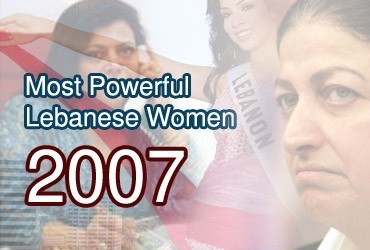 Most Powerful Lebanese Woman for 2007

The results are out!!!

The following study of the most influential and most powerful Lebanese women is based on statistics done on major media outlets throughout the year (Televisions, radios, magazines, newspapers, etc), on questionnaires and polls carried out online and on the ground in various Lebanese communities in Lebanon and abroad, and finally on the expert opinions and feedback of a qualified committee gathered specifically for this matter. The ranked powers reside in the contenders competence, the skills and knowledge in their respective fields, their impact on the society at large or their relevant communities, their power to influence or promote change, in the masses they represent or speak out for, in addition to their visibility and economic impact. This effective combination yields the most significant results. It's to be noted that the evaluated powers in question are in direct relation to Lebanon and the Lebanese people. Therefore, names such as the Lebanese Ghinwa Murtaza Bhutto for example (although quiet influential in Pakistan) were disqualified.

The final order took immense efforts to achieve, and sometimes just a few considerations or votes separated the names. We would like to thank everyone who helped out in this sometimes very tricky and laborious venture.
Thank you all!!!

This year we have an honorary prize, alongside the official list.

In this honorary first position comes your average next door Lebanese woman!
Yes, Madame tout le monde took this first position. Towards the end of 2006 and throughout 2007, she marched in downtown Beirut and all over Lebanon in the demonstrations to protest against injustice, against civil war, and called for immediate unity of Lebanon, no matter what political affiliations she held (8, 14, 11, and anywhere in between). She took over the stage and spoke with determination to achieve national goals. She was present more than ever in all talk shows, news coverage and just about everywhere and anywhere. More specifically we can point out a more organized group The National Opposition Women Group (Tajamou3 El Nisaii Lil Mou3arada Al Wataniya), the first of its kind, which organized many events, parades, seminars, debates, demonstrations etc. In one of their speech, the talker, a woman of course, declared : Today, we have proven that perhaps it's true that behind every great man stands a woman, but we on the other hand say, we stand next to our men, even in front of them to fight for our national unity!
Doesn't this give you goose bumps? Yeah, Women power! Wait, there is more.
We also just had to mention Oum Ali who, with the help of her son, bravely caught with her own two hands 2 fleeing Saudi terrorists of Fath El Islam in a northern village of Akkar, and handed them to the authorities! Unbelievable and totally surreal, but true!!! It sometimes feels as if we are part of a big Hollywood production!
This was definitely a crazy year and THE year of the Lebanese woman, by any standards. We just felt the need to pay all of them homage and tribute, before starting with the official countdown.

As you are eagerly flipping through the TV channels, you instantly stop and sigh Who is she?! Until she finishes what she has to say, you are hooked. You can no longer carry on with your restless game of zapping, as if hypnotized A very steady and confident voice utters an exceptionally sophisticated Arabic/Lebanese. Her charismatic features and long dark hair do not work any less on gripping onto you even further. Yet, her charm resides not only in the superficial but much more in the substance of her speech; Elaborated yet precise, exhaustive yet flawless. The rare stops she makes to breathe seem only there to remind us that she is actually just human!
As per specialists in the field, Vera Yammine is considered to be the real number behind the newly created Marada Party, and represents by herself alone 50% of the party's success! She also was an active initiator of the Lebanese Nationalistic Women Movement (Tajamou3 El Nisaii Lil Mou3arada Al Wataniya).
VERA YAMINE. Remember that name! We won't be surprised if in the coming years she holds an important leadership position somewhere, somehow The next Lebanese president perhaps?
We shall be watching you closely Vera ;)

For the second year in a row, critic and radio anchor Randa El Murr is between the front line names. She came in second on our overall framework, one rank higher than last year. She is held in very high esteem in the general public opinion and headed most of the polls we did. Randa even received a special title and has been labeled The Patriotic Woman of the Year. After all, she is known to be a vicious supporter of everything related to the simple Lebanese soldier! Many were infected by her fervent nationalistic attitude, only proving that she really deserves to be on our list. Congratulations again Randa!

In 3rd position came the energetic lawyer and activist May Khansa. She beautifully cut short the suspicious and biased plans of Human Rights Watch to organise in Lebanon, with the help of local conspirators, a summit in which they would denounce Lebanon's right of resistance against Israel's aggressions and barbaric acts, equating the victim with its slaughterer. May Al Khansa mobilised a grand opposition to it, and launched a national campaign which lead to the complete cancellation of this doubtful and unethical plan! The summit was replaced by a much milder press conference in Palestine, during which mostly Israel was condemned for its war crimes, with a less significant mention of the Lebanese resistance. May el Khansa is also working on bringing those behind the Sabra and Shatila camp massacre to justice. Her efforts are being undermined by local politicians who might have blood on their hands.


Ghada Eid's name also came up on this year's list, but in the 4th position. We can definitely say Ghada Eid will always be on our list for years to come. Her TV show Al Fassad is still as exciting as ever! The release of her book sukline wa akhawatiha (Souklin and her Sisters) made quite a few politicians uncomfortable. Too bad we don't have a strong legal system to respond to her accusations. Ghada Eid was elected as the Most Powerful Lebanese Woman 2006


Bahiya el Hariri came in 5th, but unfortunately for the wrong reasons.
Unlike last year, when she was seen as a responsible and uniting figure respected by all Lebanese, this year she is on our list due to her ties with radical Islamic groups.
Extremist Salafist Sunnis or Al takfiriyoun or wahabiyoun are known to have strong gun and terror power, as well as horrifying intimidation techniques, which could also be used for internal politics. They may even very well threaten the Lebanese identity altogether. Some groups have been referred to as Joundy El Sit (or The Lady's Army) and benefit from her protection. She was daring enough to publicly defend them while the Lebanese army was still fighting Fath Al Islam in the Palestinian camp of Naher El Bared.
She could have made it much higher on our list if such groups were not known for their unpredictability. They seldom have stable political affiliations and often show lack of loyalty. They are one day with you, and the next day against you. A warning to all those who like to play with fire!

Nadine Labaki came in 8th this year. With her movie Caramel (Soukkar Banat), she attracted a lot of international attention, and was received as a true star at Cannes Festival. More than 40 countries have already bought the rights to show her master piece! We like to think of her as our Lebanese Almadovar.

Meknas Alam El Dine, from the British Lebanese Association, came in 9th place.
She helped organize, among many other events, an exhibition of Lebanon's heritage, culture and art entitled "Lebanon: Vision and Achievement". It was held at Kensington Town Hall, where there were many stalls each set out as shops bringing the best that Lebanon has to offer to the heart of London. In addition to that, there were daily fashion shows, films and other associated events such as wine tasting. This initiative provided an opportunity for the Lebanese companies and other Lebanese bodies to show their products/services and portray their industries to the British public, promoting Lebanon's commerce, culture, heritage and aspirations.
It's worth mentioning that the Association also grants scholarship funds.

Last but not least came Liza Soughayar, owner of Le Liza restaurant, in the trendy district of La Bourse, Paris-France. She is said to have revolutionized the way the traditional Lebanese restaurant is perceived in France. The newly opened Le Liza attracts all of Paris, from Gerard Depardieu to Victoire de Castellane. Even the New York Times critique has praised it. It is also from Le Liza that the creative chef Karim Haidar launched his innovative recipe for the glace au taboul, a speciality of the house.

The list goes on of course, but as usual we only chose to show the first top ten on our list.
Use the below forum to comment on these results.

Who did you vote for? Did that person make it on the final list? Share your thoughts with the rest of our visitors.

Help us improve this page:   Correct or update the Most Powerful Lebanese Woman for 2007 page