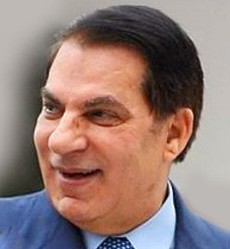 Zine El Abidine Ben Ali is the former president of the Republic of Tunisia.

He held the presidential office from 7 November 1987 to 14 January 2011. He previously had an extensive military career of more than 10 years which began in 1964 as a Tunisian staff officer. Ben Ali was also appointed General Director of National Security in 1977. He served as Ambassador to Warsaw in 1980 , and as Minister of State in charge of the Interior before being appointed Interior Minister in 28 April 1986.

In October 1987, Ben Ali was appointed as the Prime Minister of Tunisia. One month later he became the President of Tunisia as he took power from President Habib Bourguiba who was declared incompetent for the position.

After that, Zine El Abidine was re-elected many times with enormous majorities voting for him. He was last elected on the 25th of October 2009.

In the month of January 2011 and due to massive protests across the nation, Zine El Abidine Ben Ali declared a state of emergency in Tunisia.

He dissolved the government and promised new elections within few months. However, the riots and massive demonstrations persisted and demanded his departure.

On January the 14th 2011, Prime Minister Mohammed Ghannouchi went on state television and announced he was assuming power in Tunisia including the presidential duties.

The former president of Tunisia Ben Ali left for Malta heading to France, but ended up landing in Saudi Arabia. Apparently Nicolas Sarkozy refused to receive him in France. To note that France (and the west in general) was for a long time the ally of his corrupt regime, overlooking his undemocratic behavior.