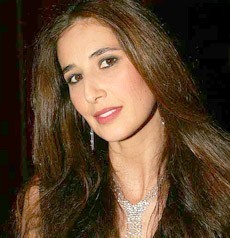 Yara Lapidus is a Lebanese French singer, she is the wife of the famous fashion designer Olivier Lapidus.

In the mid of the year 2009, Yara Lapidus released her debut album entitled "Yara", The album contains thirteen songs.

Her first attempt in music was back in the year 2008, when she released a single entitled "Antes".

You can listen to Yara Lapidus music and check out her photos on Fanoos.

Help us improve this page:   Correct or update the Yara Lapidus page