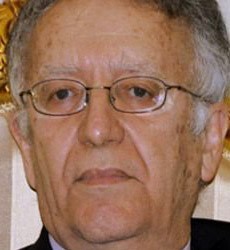 
As president of Tunisia's Higher Political Reform Commission, he was charged with overseeing the constitutional reforms after Zine El Abidine Ben Ali was ousted in the Tunisia Protests. A review of his background however, shows the paradox of such a choice:

In July 1990, Yadh Ben Achour was raised by Ben Ali to the rank of Commander of the Order of the Republic. Upon the arrival of Ben Ali to power, Ben Achour exercised the function of member in Economic and Social Council of Tunisia (1987-1988). For more than 4 years afterwards, he was also named by Ben Ali as a Member of the Constitutional Council (1988-1992).

Although he resigned from this position in 1992, he was always a supporter of Ben Ali, who also approved granting him the position of Dean of the Faculty of Juridical and Social Sciences of Tunis during the years 1993-1999.

Yadh Ben Achour is a founding member of the International Academy of Constitutional Law (AIDC), which has its headquarters in Tunis. This A.I.D.C. members include the intellectual elite of Ben Ali, including law professors supporters of Ben Ali as his brother Rafaa Ben Achour, his sister Sana Ben Achour, Slim Laghmani, Abdelfattah Amor, Horchani, Jazi Dali, and Zouhayer M’Dhaffer. All the above mentioned professors of public law at the Universities of Tunis actively took part in the revision of the Tunisian Constitution in 2002 to allow Ben Ali an unlimited mandate.

Help us improve this page:   Correct or update the Yadh Ben Achour page