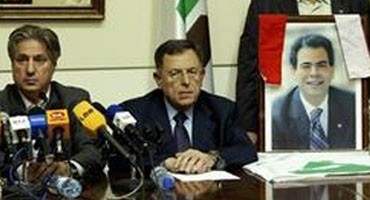 In the afternoon of November 21, 2006, one day before Lebanon Independence Day, gunmen opened fire on Lebanese Minister Pierre Amine Gemayel after ramming his car in Jdeidet El Matn suburb of Beirut.

Pierre Gemayel was rushed to a hospital in al dawra, where he was declared dead along with his bodyguard. The method by which Gemayel was assassinated is somehow unique as gunmen killed in broad daylight, rather than anonymous car bombs triggered remotely.

Saad El Hariri, the son of Rafik El Hariri, the majority leader of the Lebanese Parliament and the head of the Current for the Future political movement, accused Syria of ordering the killing. Syria denied any involvement and condemned the assassination.

Samir Geagea, the leader of The Lebanese Forces, a major Christian party, asked President Lahoud to resign, and also accused Syria of ordering the killing.

Margaret Beckett, Secretary of State for Foreign and Commonwealth Affairs in the United Kingdom, called the killing "contrary to the interests of all in the region" in a press conference aired on Al Jazeera English approximately an hour after Pierre Gemayel was announced dead.

According to a report, Kuwaiti daily Al Seyassah reported that allegedly an editor from the state-run Syrian Arab News Agency contacted a Lebanese pro-Syrian newspaper 55 minutes prior to the assassination to inquire about the murder.

The story claims, the call took place at 3:05 pm local time, the SANA reporter called back 10 minutes later to apologize for the original call and that Al Seyassah did not name the Lebanese newspaper to protect its identity. There have also been claims that the Mossad was responsible for orchestrating the assassination to create factional fighting and trigger a anti-Hezbollah/anti-Syrian backlash after Israel's failed military campaign against Hezbollah.

Who do you blame or think was behind the assasination of Minister Pierre Amine Gemayel, let the world know what you truely think about this killing.

Help us improve this page:   Correct or update the Who killed Pierre Amine Gemayel page