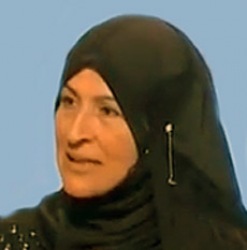 Wafaa Sharara is a famous Lebanese actress, who started her career back in the seventies.

One of her first roles on TV was in the Lebanese TV series "The Adventure" (Al Mooghamara) in 1978. She played a good role with famous Lebanese actors such as Layla Karam, Shakib Khoury, Hind Abi Lamaa and others.

Some of her works in Lebanese drama include:

It is good to note that Wafaa Sharara was one of the major contributors to the Doubling (Doublage) wave of Mexican and Venezuelan TV series. She along with other professionals such as Tony Sasi and more added their voice and talent to make the transformation of the series to the Arabic language a success.


Help us improve this page:   Correct or update the Wafaa Sharara page