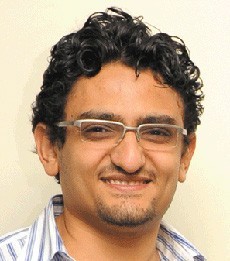 Wael Ghonim is also a prominent blogger who lived in Dubai, UAE where he worked for Google Middle East.

During the last week of January 2011, He traveled to his home country Egypt to attend a conference. He got involved in the Protests which took place at the Tahrir square and went missing on Thursday January 27, 2011.

Wael posted his last tweet on Jan 27, before he went missing. On 25th Jan he tweeted "Despite all the warnings I got from my relative and friends, I’ll be there on Jan25 protests." On 26th Jan he posted "We got brutally beaten up by police people" and his last tweet was: "Sleeping on the streets of Cairo, trying to feel the pain of millions of my fellow Egyptians."

Wael Ghonim was also the administrator of the Khaled Said page on Facebook, which supported Al-Baradei and called for staging the big rallies to overthrow the Egyptian Regime of Hosni Mubarak.

According to The Dostour newspaper, The security services in Egypt may have kidnapped Wael on Thursday the 27th of January 2011. There were other speculations that he might have gotten brutaly injured during the crackdown by the Egyptian police on Friday 28th.

Wael Ghonim was released on February 7th 2011 by Egyptian officials, as it turned out he was a political detainee.

Help us improve this page:   Correct or update the Wael Ghonim page