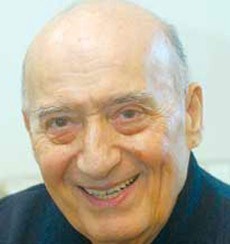 Wadih El Safi was born in the town of Niha in the Chouf in 1921, he passed away on Friday the 11th of October 2013. Wadih started his artistic journey at the early age of seventeen when he took part in a singing contest held by the Lebanese Radio and was first among fifty other competitors. He was named then the first singer of Lebanon.

In 1947, Wadih traveled to Brazil where he remained until 1950. During this period, he used to sing for the Lebanese in the Diaspora about their motherland, which lives in their hearts.

He performed songs about the land of the ancestors, the countryside, the village and the family."Loubnan ya qoteaat sama" (Lebanon a piece of heaven), Beyty (home), Ya khti njoum el elil shoufiha (See the stars of the night, my sister) and Yabni (my son) are among the many songs which moved every immigrant and unleashed his nostalgia.

After his return to Lebanon, Wadih Es Safi endeavored to develop folk music and chose Poetry and Zajal to inspire patriotism and focus on love, devotion, morals and values.

He was known for his Mawals of Ataba, Mijana and Abu el Zuluf. He roamed the world singing in many languages alike Arabic, French, Brazilian and Italian. He took part in major international festivals and earned many high distinction honors in Lebanon, Tunisia, Jordan, Yemen, Morocco, Syria, Mascat and France. He earned an honorary doctorate form the University of Kaslik.

His first appearance in the Baalbek Festival goes back to 1957.

Of his most important theatre plays we recall: "mawsam el izz: (the good times), "ardouna ila el abad" (forever our land), "kasidat houb" (a love poem), "Al anwar" (the lights), and Ayyam sayf (summer days) and of his cinema work we name: "Mawwal" and "Nar el showk" (the fire of passion) with the famous artist Sabah.

His records were played throughout all the Arab radios and he carried the message of Lebanon in his voice, which crossed all the frontiers.

Throughout 60 years, he devoted his art to the human values he believes in. He was able to make his songs known by all in Lebanon and the Arab world. His audience gathered people of all ages, tastes, classes and regions, in a new school based on tradition and inspired by folklore. He performs his songs with spontaneity and simplicity aided by a flexible voice, which can change form one note to another and expresses, thus, the power and richness of his vocal talents. Wadih El Safi has proved that his voice has no match and can perform all kinds of songs with the same high skills. He is, thus, worthy of sitting at the throne of the genuine Arab Tarab.

Wadih El-Safi is a great artist who has preserved the glow of his presence and the brilliance of his performance.

Help us improve this page:   Correct or update the Wadih El Safi page