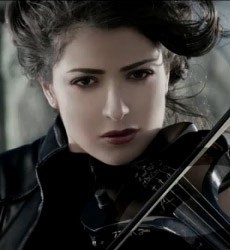 Vanessa Nassar was intended to become the Vanessa Mae of the Middle East. She was born in Montreal-Canada but grew up in Lebanon.

Vanessa's first noticeable appearance was in the music video Longa V directed by the talented Yehya Saade, for a song composed by Sami Bitar in 2009.

Vanessa V then released a full album of fusion classical-pop music with an oriental feel, including tracks like Folklore, Houroub, Mabrouk and Hanine.

Vanessa V has also toured the Arab World to perform, and has played in Egypt, Kuwait, and Bahrain. She also performed at the VIem jeux de la Fancophonie in Beirut.

For another violin player from Lebanon see Hanine Al-Alam.

Help us improve this page:   Correct or update the Vanessa Nassar page