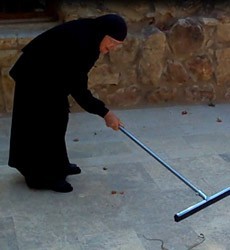 "Undertaker Nun" or "Undertaker Sister" is the nickname given to a sister in Deir Kaftoun convent, in North Lebanon.

She was given that name because of her strong and courageous personality, specifically when dealing with snakes that find their way into the church and lounges of the religious site. The brave sister is used to killing a dozen every week, especially during high season.

Below is a very funny video featuring the "Undertaker Nun" live in action!! We shot this video around September 2010, while we were visiting the old Church in front of the monastery.

See also How to Exterminate Snakes.

Help us improve this page:   Correct or update the Undertaker Nun page