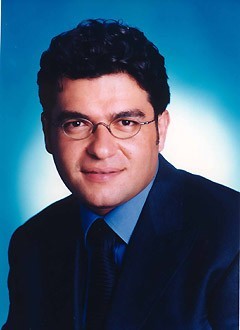 Toufic Gebran is a highly motivated broadcaster with insight into devising ideas into TV format, He was the first presenter in the Arab world producing and presenting a show specialized in the field of Internet and Information & Communication Technologies (ICT). He has 13 years of TV experience, in different kind of programs: games, quiz, entertainment, musical, talk show, social, cultural and technology shows.

Toufic Gebran was born in Jbeil (Byblos) - Lebanon.
Between 1988 and 1993 Toufic Gebran worked as a broadcaster in several radio stations in Lebanon: Radio Avenir, Radio Magic which was part of LBC and Radio Rama which was owned by Randa El Murr.

In 1993, Toufic Gebran won the golden medal in broadcasting during the competition of the famous fans show on LBC: 'Studio El-Fan 93'.

Toufic worked at the Lebanese Broadcasting Corporation - LBC from 1993 till 1996. He contributed as a presenter and a producer for famous programs including; Dar El Founoun, Zouwar El Dar, and several festivals in Lebanon and abroad.

During the years 1999-2003, Toufic Gebran joined Abu Dhabi Television which is part of the Emirate Media Group.

Toufic was a senior presenter and producer for programs on Abu Dhabi TV, including Layali Al Noojoom, Amassi, and the famous Click program specialized in Information Technology and Telecommunications (ICT).

In 2004, Toufic Gebran moved to Al Hurra Television which broadcasts to the Middle East, Europe and Africa from Washington, DC in the USA.

Toufic Gebran is considered today as a very famous Anchor and Producer for programs including:'i-Tech' which is Alhurra's weekly technology news hour that features the latest in computer and information technology and telecommunications with expert guests, gadgets and updates, covering the most important technology conferences and expos in the USA and around the world.


You can watch i-Tech online at : http://www.alhurra.com/archive.aspx

Help us improve this page:   Correct or update the Toufic Gebran page