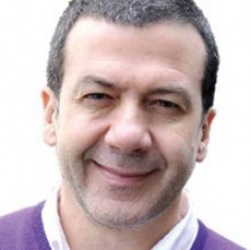 Tony Baroud is a known Lebanese Television host and presenter. He started his work with LBC as a Sports TV presenter, then moved into presenting TV Game Shows. In 2013, Tony Baroud was appointed the position of technical management director of the art section on LBC. This position was held for many years by Tony Qahwaji.

In 2012, Tony Baroud had a small experiment, when he attempted to sing, it was a promotional type of song to encourage the Lebanese football team, which qualified for the advanced stages towards the World Cup qualifiers. "Alla Hamikon" was the name of song and the idea was born at breakneck speed and executed within two days. The lyrics and music are by Salim Assaf and the distribution by Marc Abdelnour.

In 2012 Tony Baroud was awarded as the best TV presenter according to "Sayidati magazine".
Currently Tony Baround presents the TV show "Ahla Jalseh" in which he interviews Celebrities from the Arab World.

Help us improve this page:   Correct or update the Tony Baroud page