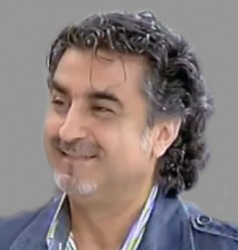 Tony Abi Karam is a famous and talented Lebanese poet and composer. He has worked with numerous Lebanese and Arab artists, such as Najwa Karam and Ragheb Alama.

Tony Abi Karam has written many songs for Ragheb Alama such as "Jenni, Jenni". He also worked on a new song with Ragheb for his upcoming 2014 album, Walid Al Massih worked on the distribution of the song.

Tony Abi Karam has a young daughter named Amanda Abu Abdullah, a film director, who won an award for best short film at the European Film Festival for her film "Hakki Bala Taameh".

Tony Abi Karam felt disappointed when the business manager of Lebanese singer Myriam Fares, Ghassan Chertona, signed a contract with a Saudi Arabian company to produce a perfume using the name of the song «Ana Wil Shok». Abi Karam, the author of the song believes that he owns the the exclusive right to lyrics therefore his approval was needed in this contract.

Help us improve this page:   Correct or update the Tony Abi Karam page