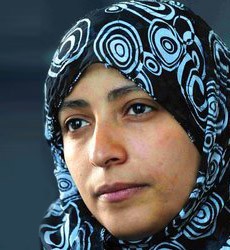 Tawakkol Karman (aka Tawakul Karman) is a Yemeni parliament member, journalist, human rights activist, and a leader in the political movement that launched the Yemen Protests.

Tawakkol Karman is chairwoman of Women Journalists Without Chains, and has been leading sit-ins and demonstrations calling for greater civil rights, education and economic opportunities in Yemen for more than 10 years.

She is also known for her positions against the rise of religious fundamentalism and violence in her country. In a controversial incident in 2004, Tawakul Karman removed her niqab at a human rights conference, calling for other women to follow in her footsteps.

Karman is part of Al-Islah, the main opposition party in Yemen, which won won 46 seats in the 2003 parliamentary elections. Karman is one 13 Al-Islah women parliament members since 2010.

Tawakkol Karman was arrested in January after she took part in a student demonstration of solidarity with the protests in Tunisia and calling on Yemeni President Ali Abdullah Saleh to step down. She was however freed shortly after.

Tawakkol Karman is widely considered to have started the movement in Yemen, alongside other female activists. She is the nation's most vocal and well-known activist, and is helping to break perceptions of women in her conservative society.

Tawakkol Karman is said to be to Yemen what Mohamed Bouazizi was for Tunisia; She energized the pro-democracy demonstrations in Yemen to pressure Saleh to resign.

Tawakkol Karman was nominated for the Arab Revolution Women Award.

Help us improve this page:   Correct or update the Tawakkol Karman page