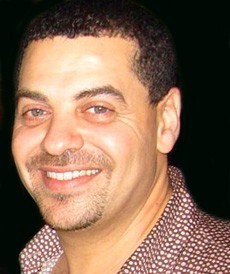 Tarek Al Arian is a famous Palestinian-American Director and producer who currently resides in Egypt.

Tarek Alarian was born on the 12th of September 1963 in in Kuwait. He is the son of famous movie director Riad Al Arian.

Tarek Alarian was married to Hala Attal, from whom he had s son named Omar Alarian. The couple divorced in 1997.

In 2005, Tarek got married to the Syrian singer Asala Nasri.

Tarek Alarian traveled to the United States at an early age where he obtained the US Passport and received a Bachelor of Arts degree in cinema and photography from the Southern Illinois University.

Tarek started his professional career between 1986 and 1988 by working as an Executive Producer at the Film Production and Studios - AAA in Athens, Greece.

In 1989, Al-Arian directed and produced his first movie called The Emperor (Al Imbarator) for which he received an award from the Cairo film festival.

Since then he has been directing and producing a movie every few years. Some of his movies include: Le Pasha (El Basha) in 1992, Snakes & Ladders (Al Selem Wi El Taaban) in 2001.

His other movies include: A Girl Left Behind, Aswar Al Kmar and New Life.

In the video-clip industry, Tarek made a big mark by directing and producing more than eighty clips. He became popular as a video-clip director after he worked with Amr Diab, directing clips for his songs: Ragain, Nour El Aine and Awedouny.

He worked with new talents directing songs such as Kan Kalamy for Haitham Nabil and Woust Al Balad for Arabily.

In the commercial advertising industry, Tarek Al Aryan directed around 400 advertisements for famous brands such as: Coca Cola, Hyundai and Americana foods.

Help us improve this page:   Correct or update the Tarek Al Arian page