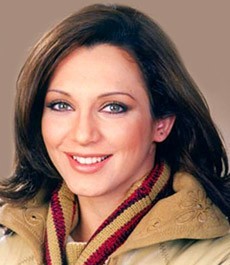 Sulaf Fawakherji is a famous Syrian actress who was born in the city of Latakia on the 27th of July 1977.

Sulaf studied Art and Sculpture at Adham Ismail Fine Arts Institute in Syria. She started acting on stage and took roles in the play Al Sawet and Hekayat El Sheta (Tales of the Winter).

Fawakherji became popular on the small screen when she took role in many Syrian soap operas.
In 1998, Sulaf Fawakherji took her first role in the movie Al-Tirhal and Nassim El Roh.

In 2006, She came back to the cinema and took a main role in the movie Halim, two years later she took role in the films The BabyDoll Night and Hassiba.

Help us improve this page:   Correct or update the Sulaf Fawakherji page