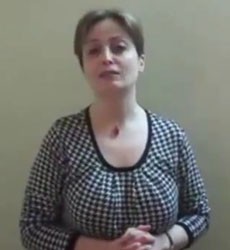 Suhair Atassi is a Syrian political activist from the opposition.

The Syrian militant for human rights Suhair al-Atassi (aka Souhair al-Atassi) has been arrested several times in the past, and is frequently harassed by the regime of President Bashar al-Assad.

It is still unclear at this moment whether Suhair Atassi is really a legitimate activist or one with a hidden foreign agenda. Her positions are confusing to many.

Suhair Atassi refused to take part in the meetings of the Syrian National Dialogue Committee (See Syria Protests) and was part of the Antalya Conference (backed by the Israeli sponsored organization Freedom House). However, she also called for the boycott of the meeting held on Monday 4 July 2011 at Cinema St. Germain in Paris under the name of "popular movement in Syria" which was organized by La Regle du Jeu (The Rule of the Game) magazine and website which is headed by Bernard-Henri Levy, one of the staunchest defenders of Israel along with other French figures that are noted for being "Israel's friends in France". She called Syrian participants such as Ammar Qorabi (in exile in Cairo, he heads the National Organization for Human Rights), Omar Al-Azm (anthropologist, professor at the University of Ohio), Adib Shishakli (grand son of a former Syrian president in USA), and Georgette Alam to also cancel their participation in the conference... This could either be because she is a grand nationalist, or simply because she understands how such a participation would reveal the true nature of the unrest in Syria, a foreign conspiracy (Syrian opposition members in foreign countries doe not have such a good reputation in the eyes of the majority of the Syrians in Syria).

Souhair al-Atassi was one of those who called for civil disobedience through her blog and youtube videos, asking Syrians to burn their bills and not to pay their taxes.

Help us improve this page:   Correct or update the Suhair Atassi page