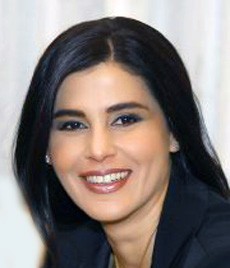 Her full name is Strida Tawk Geagea, also written Sethrida Geagea, Sitrida Geagea or Setrida Geagea. She was born on the 31st of May 1967 in Kumasi, Ghana.

Her family is the famous Maronite Taouk family from Lebanon which are known for their business investments in Ghana.

Strida Geagea was a student at the Lebanese American University - LAU known as Beirut University College - BUC at that time. She used to attend the meetings and lectures of Sameer Geagea.

She later married Samir Geagea and got a Degree in Political Science in 1994 from LAU.

In 1994 and after Sameer Geagea was placed in prison, the LF Party was disassemble . However, Strida Geagea challenged the political conditions of the time. She fought, along with party members and believers, for almost 11 years until Samir was released from prison.

In 2005 parliamentary elections, Sethrida Geagea led the LF party, and the result was six MPs from the Lebanese Forces Party and freedom to her husband.

In the year 2008, Sethrida Geagea was ranked among the top ten Sexiest Female Politicians in the World, according to Spike Top 10.

Sethrida Geagea is a member of the Lebanese Maronite League.

Help us improve this page:   Correct or update the Strida Geagea page