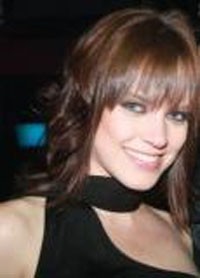 Steffi Faysal is a Lebanese TV presenter and radio anchor, born to a British mother and a Lebanese father.

Steffi Faysal (real name Stephanie Faysal) became known as the television presenter of the program Eish Beirut on Orange Television - OTV.
3ish Beirut was a youth directed program that shed light on the Lebanese Nightlife, whereby Steffi visited all the hotspots in Lebanon to report on the latest trends, parties, pubs, and nightlife. Her show was directed by a young generation of very creative people. Steffi Faysal's TV show placed the spotlight on a new list of Lebanese Nightclubs every week.

Steffi Faysal later presented a show called Espace Pub, a show dedicated to advertising and publicity. A new theme was picked every week , and a set of related ads showcased as examples. Old Lebanese ads were also dusted off and replaced under the spot light, followed by a short interview with a Lebanese creative from the Advertising Industry for a quick chit chat.

Steffi Faysal is also searched on the net by the names: Stefi Faysal, Stephy Faysal, and Stephanie Faisal.

Help us improve this page:   Correct or update the Steffi Faysal page