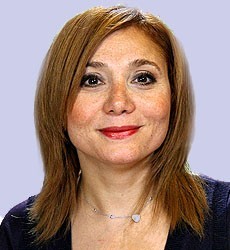 Sonitta Nader is a Lebanese TV presenter reporting from France.

Sonitta Nader hosts a show called Made in Paris on Orange Television - OTV. In its second season, the name changed to Paris Je T'M.

Sonitta Nader opens the doors of Paris, world capital of luxury, to the Lebanese and Arab viewers.


Made in Paris, is an episode of around 26 minutes of good taste and luxury "à la française"... Chanel, Guerlain, Lacroix, ... but also the French gastronomy, hospitality and great places (Ritz, Fouquet's)... Portraits, reportage with the creators, luxurious and unusual places around delicious recipes and their chefs...


Sonitta Nader is also a journalist and writes articles for magazines. She studied journalism in university (Lebanon), before joining radio Monte Carlo in 1992 as an anchor. She writes mostly about fashion for Arab magazines that are published from France. She also works in ART and CFI Televisions.

Help us improve this page:   Correct or update the Sonitta Nader page