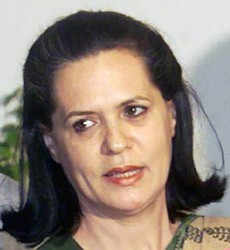 Sonia Gandhi is the Italian-born President of the Indian National Congress.

Sonia Gandhi is the widow of Rajiv Gandhi, the former Prime Minister of India.

Sonia is the Chair person of the United Progressive Alliance, which is the ruling party.

Sonia Ghandhi is also the leader of the Congress Parliamentary Party.

Sonia Gandhi was named by Time magazine under the 100 most influential people of the world for the years 2007 and 2008.

Forbes magazine named Sonia Gandhi as the 3rd most powerful woman in the world for the year 2004. She was ranked on number 6th in the year 2007 by the same magazine.

Help us improve this page:   Correct or update the Sonia Gandhi page