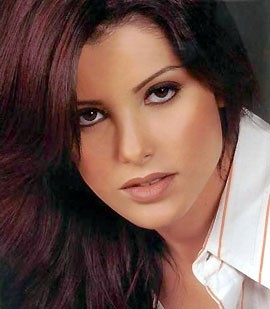 Sofia El Marikh is an Arabic pop singer from Morocco and holder of the title Most Desirable Arab Woman for 2009. She also ranked third in Top 100 Sexiest Arab Women 2010.

Sofia had a flourishing career in modeling right away and regularly flew between her hometown and France. With her exotic complexion and great body, it is no surprise she ranked #1 on the list of Sexiest and Most Desirable Arab Women for 2009!

Despite all her previous efforts in modeling and even in acting, it was only until the year 2004 that her career would dramatically progress. By joining the highly promoted reality TV show Star Academy Season 1 in its Middle Eastern version (broadcasted from Lebanon), Sofia El Marikh was introduced to an Arab public that completely ignored her existence then.

With her charm and sweetness, Sophia became the public’s favorite right away; a public that would carefully follow her every progress. This connection grew even tighter after Sofia fell during sports class, injured her back and broke her nose. Whether this was staged emotional drama or an authentic accident, the saddened public was discovering the pleasures of watching a TV reality show for the first time.

Sofia’s voice was better equipped to deliver English and French songs rather than Arabic ones, and this could be the reason why she got nominated so frequently. During her stay at the academy, Sofia El Marikh became best friends with Bachar Al Shatti and Cynthia Karam. She left the academy on Friday the 5th of March 2004, after being nominated against Kuwaiti student Bachar, who received more votes.

After Sofia El Marikh left the academy, unconfirmed rumors circulated that she was depressed and had even attempted to commit suicide.

Sofia El Marikh then started working on her artistic image hoping to create her own unique identity. With the release of her debut album “Kemet Hobb”, signs of maturity were beginning to be noticeable. She gradually broke off previous labels that portrayed her as a sweet innocent girl. With her music videos "Kelmet hobb", "Baheb Feek","Es2aln Ana", Sofia became more woman; a full grown, sexy, provocative woman that is not afraid to go after what she wants.

Today, Sofia regularly takes part in music festivals and is often seen in TV interviews and on magazine covers throughout the Arab World.

Help us improve this page:   Correct or update the Sofia El Marikh page