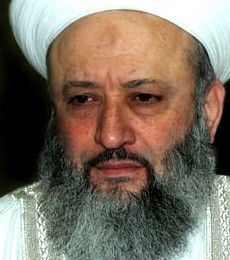 Sheikh Maher Hammoud is the Imam of Al-Quds Mosque in Saida Lebanon.

Sheikh Maher Hammoud was born in Saida in October 1953. He is one of the founders of the Islamic Group in Saida in 1971 and governed it till 1979. He was also the founder of the Association of Muslim students in Saida.

He studied at the Faculty of Law at the University of Damascus from 1972 until 1977.

Formal mosque preacher and imam since 1979,Sheikh Maher Hammoud played a prominent role in extinguishing sedition in Lebanon and the region, including in the Palestinian camps.

Sheikh Maher Hammoud is a strong supporter of the resistance against the occupation, and has a good relationship with most resistance movements and factions in the region.
He has played and continues to play an important role in bringing together the different sects of Islam.

Help us improve this page:   Correct or update the Sheikh Maher Hammoud page