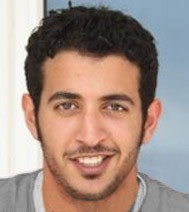 Sheikh Khaled Bin Hamad Al Khalifa, also written Shaikh Khalid Bin Hamad al-Khalifa, was born on September the 23rd 1989. He is the fifth son of His Majesty King Hamad bin Isa al-Khalifa of Bahrain who is married to three wives. Khalid and his brother Prince Nasser Bin Hamad Al Khalifa are sons of the second wife (a Saudi of Bedouin background). His other brothers Salman and Abdullah are both sons of Sheikha Sabeeka bint Ibrahim Al Khalifa. She is Chairwoman of the Supreme Council for Women. Faisal, the son of a third wife, tragically passed away in a car accident. Salman bin Hamad Al Khalifa is Bahrain's Crown Prince.

Sheikh Khalid Bin Hamad Al Khalifa first studied at Ibn Khuldoon School in Bahrain, then later graduated and obtained his Military training from Sandhurst Royal Military Academy,UK in August 2008.
Like most members of the Royal families of the Gulf including his brother Nasser, Prince Khalid is known for his horseback riding skills. He is a champion in endurance races, and has been awarded with many titles including first position in Thetford Endurance Ride in England on 10th August 2008.

Sheikh Khalid Bin Hamad Al Khalifa was appointed member of the Supreme Council for Youth and Sports of Bahrain on 19/3/2010. He is also Vice-President of the Bahrain Royal Equestrian & Endurance Federation since 2003.