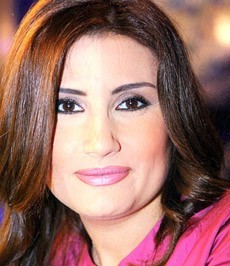 In the year 1993, Shza Omar graduated from the Lebanese American University in Beirut with a degree in Communication Arts and Journalism.

Shada Omar started her career by working as a news anchor at the New TV for 7 years. At New TV she gained a lot of experience by hosting political shows.

In the year 1997, Shaza joined the Lebanese Boardcasting Corporation - LBC as a presenter for the morning program Neharkon Saaid. She hosted hundreds of Arab politicians and journalists. At the same time, Shaza was the first news anchor to present news at the LBC satellite news channel. She continued to anchor the news for LBC Sat for 8 consecutive years.

At LBC, Shaza presented and hosted the political show Al Hadath and later Anta Wal Hadath, which she hosted for close to ten years.

In the begining of the year 2010, and after working for many years, Shada Omar resigned on the air from LBC.

Help us improve this page:   Correct or update the Shaza Omar page