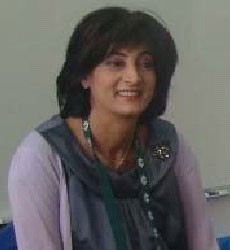 Scarlett Haddad is a Lebanese journalist and political annalist.

Scarlett Haddad writes in the daily newspaper Annahar along with its french version L’Orient le Jour.

On the professionalism of the media, Scarlett asserts impartiality does not exist. As long as no manipulation nor lying is involved, a journalist or newspaper is allowed to have an opinion.

Scarlett Haddad confirms the international press should not be placed on a pedestal, and expresses her disappointment with the reality of things . She was often placed in an awkward situation with the foreign agencies she worked for, whereby she would be given a special assignment in contraction with the situation on the field. When her reports did not coincide with the media's agenda, she would often be accused of not being cooperative.

Commenting on the Syria Protests, Scarlett Haddad places them as part of the ongoing grand conspiracy plan to dismantle the axis of resistance (Iran-Syria-Hizbollah), with a strategy to export the scenario of Libya into Syria.

The studied plan involves the recourse to media propaganda, special armed forces to sabotage the regime from inside, and inflaming sectarian clashes.

Scarlett Haddad also points out to the unprecedented suspicious speed of the creation of opposition TV channels such as Syrian Sham TV and Marada TV, and their equally speedy adoption by the western press as a source for their information.

She adds KSA has accepted to give a bigger role to Qatar, in return for Al Jazeera TV's support in making the plan work. To note that the channel has recently lost a lot of viewers who got irritated by the station's lack of professionalism in covering the Arab Revolutions especially in Syria and Bahrain. This is also why Ghassan Bin Jiddo resigned from his position.

Help us improve this page:   Correct or update the Scarlett Haddad page