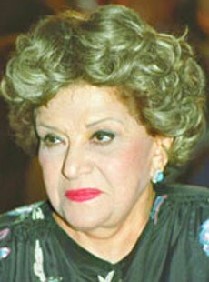 She moved to Cairo to start professionally as an actor, so she modified her name to Sanaa Gamil or Sana Jamil.

One of her best roles in acting was as Nefisah opposite Omar Sharif in the movie (A Beginning and an End) directed by Salah Abouseif in 1960.
The movie was based on a novel with the same name by the Nobel Prize winner Naguib Mahfouz.

In the year 1961, Sana Gamil won the best supporting actress award at the Moscow Film Festival in 1961 for her role in the Beginning and an End movie.

Sana Gamil was married to the famous Egyptian journalist Louis Grace, the couple had no children.

Sana Gamil also had a role in few Television series such as Oyoun (Eyes) with Fouad Al Mohandes, and in few theatrical plays such as The Visit with Gamil Rateb.

Help us improve this page:   Correct or update the Sanaa Gamil page