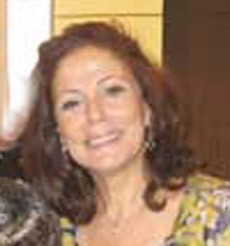 Samar El Hajj is the wife of Ali al-Hajj, a former senior Lebanese security officer who was suspected of involvement in the murder of Rafiq al-Hariri in 2005.

Samar El Hajj questioned the intentions of the Special Tribunal for Lebanon that is investigating the assassination of former PM Rafik Hariri, for four straight years. She led a fierce campaign to expose them to the public.

Samar el Hajj ranked #3 in the list of Most Powerful Lebanese Women 2009.

Samar el Hajj also played a big role is promoting the Gaza flotillas to break the siege, and even organized her own flotilla called Mariam, which was to include May Hariri onboard. However, Mariam was delayed for technical and political reasons, and in July 2011 went to Syria instead to support the Syrian people, the country's economy and all those combating the counter-revolution.

Help us improve this page:   Correct or update the Samar El Hajj page