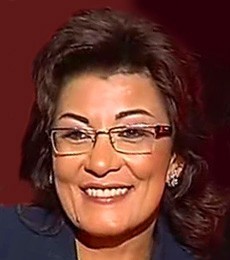 Samah anwar is an Egyptian actress who became mostly famous in the eighties and nineties. She was born in Cairo on the 22 of April 1965.

Samah played various roles, she is mostly known for her tomboyish style and strong character.


Her first appearance was in 1985 in the movies: "Sanawat al khatar" and in "Raghab Al Wahesh".

In addition to movies, Samah Anwar played various roles in Egyptian television series such as "Ziaab Al Jabal" and "Al Hisab", he also played roles in many plays, her last was "Ballo". In 1998, Samah had an accident and had to stay away from the scene for 4 years.

In 2003, Samah came back and started hosting a game show on DreamTV, which was very successful and added a feather into her cap.

In 2008 she went back to acting and played the role of margariet in the movie "Jenent Al Asmak" (The Garden of Fish).

In 2011 Samah Anwar caused a controversy when she took a stand with former president Mubarak against the protectors during the Egypt protests. Few weeks later, she gave an apology and tried to explain what has happened and why she said what she did. It is good also to note that following her statements many people attacked her in the media and also on her facebook page.

Help us improve this page:   Correct or update the Samah Anwar page