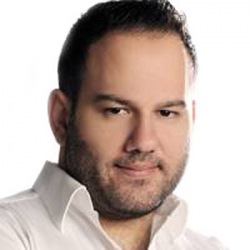 Salim Assaf is a contemporary Lebanese composer, writer and poet born in 1979 in the village of Al-Rouhaniya in Chouf, Lebanon. He is mostly known for his romantic lyrics and sensual music.

In 2003, Salim Assaf received a degree in Hospitality and Tourism from the Lebanese University. That same year, he received a diploma in playing the lute from the Lebanese National Institute of Higher studies. Assaf drew a lot of attention to his talent after a cooperation with Lebanese singer Carole Samaha who sang in 2004 from his words, "Ghali" and sang to his melody of "Kif Baddi Eish" (How I want to live). Assaf wrote and composed her famous song "Adwaa Al Shohra", "Esmaani", and "Wehyatak" from her 2006 album.

In 2007, Salim Assaf cooperated with Lebanese singer Majida Roumi by composing the music for her song "Beyawm Orsak" (your wedding day). In the same year, Najwa Karam sang "Naawer Ayami" (Light my days). Rami Ayach sang for him "Ishtaatelak" and "Doomini". Lebanese singer Iwan sang his words in the song "Baaqi".

In 2008, he collaborated with artist Nicola Osta for his song "Kol Al Haq Alayk" and he re-collaborated in 2009 with Carole, participating in the writing of the song "Ali." In 2009, Yara singer sang from his words "Ma Yehemak".

He wrote the lyrics and composed the music from the album of Sara Al Hani. He also collaborated with singer Rouwayda Attieh.

Assaf Released dozens of songs from his signature, most notably "Nemshi w Nemshi" for Saber Al Roubai, "Sawa" for Rami Ayash and Maya Diab and "Karjit May" for Zain El Omr.

In 2012, Assaf wrote the song and the melody for Lebanon Team Football "Allah Hamikm" which was sung by Tony Baroud.

In 2012, Salim Assaf decided to sing and released his first song entitled "Lawali Albi", after that he released two more songs: "Ya Sheti" and "Sorti Eli" which was a big success.

His first collaboration for 2014 was with Star Academy 4 singer Dany Chamoun who decided to make a comeback to the music scene.

Help us improve this page:   Correct or update the Salim Assaf page