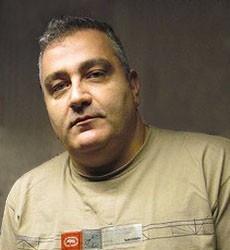 Said Murad's popularity dates back to 1990 when he first started working as a D.J. in some of the most famous clubs around Lebanon, such as Gotha, Jet-Set and Opera.

As years passed by, Said Murad became known as one of the best DJs in the Middle East.

In 2001, Murad produced his first album entitled "2001 Nights". The album was a big seller at the time, and was named as The Best Selling Arabian Album in the history of Arabic music!

Said Mrad gave the legendary Um Kulthum a fresh rebirth by introducing techno-driven mixes of her famous tunes. Thanks to him, the whole world rediscovered this Egyptian Icon under a new and much youthful angle; The Queen of Tarab as dance club music, this was considered a revolution.

In 2002, he signed a contract with UNIVERSAL and released his second album in June 2002 in France.

His album performed so well in France and ranked 34 in the top 100 best selling albums of that year.

In 2003, Said Mrad released yet another album entitled "Another 1001 nights" which became the best selling album of 2004.


Said Mrad's name became attached to that of Shakira, after remixing some of her best songs including her first international Arabic tinged hit (Ojos Asi) that made her an overnight sensation, followed by (Whenever Wherever), and more recently (She Wolf). He also made several remixes for other world famous super stars such as Ricky Martin (One Night Man), Despina Vandi (Gia), and Sakis (Ola Kala).


Said Mrad played in many famous nightclubs in Europe such as MILLENIUM in Marseille, BUDHA-BAR, BARIO LATINO and NIRVANA LOUNGE in Paris.


Said Mrad also played his music in PRIVATE BEACH in Ibiza,LITTLE BUDDHA-BAR in Sharm El Sheikh and many famous Clubs in Cyprus, Beirut, Jordan, and Dubai.

Help us improve this page:   Correct or update the Said Murad page