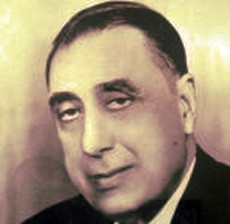 Sabri Hamadé also known as Sabri hamadeh or Sabry Hamade is a Lebanese politician and a speaker of the Lebanese Parliament for five terms.


Sabri hamadeh started his political life as a Shiite MP from hermel.

Sabri hamadeh got elected in all elections which were held between the years 1927 and 1972.

In the year 1943, Sabri Hamadé played a major role in the independence of Lebanon.

Help us improve this page:   Correct or update the Sabri hamade page