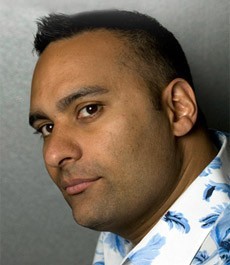 Russell Peters is a famous canadian standup comedian who is from Anglo Indian descent.

His full name is Russell Dominic Peters. Russell Peters was born on the 29th of September 1970.

Peters used to DJ, especially as a "scratch" artist and still does it in his home as a hobby.

In September 2007, it was confirmed that Peters made a deal with FOX to develop a new sitcom, based on his experience in Canada.

On the 6th of April 2008 Russell Peters hosted the 2008 Juno Awards ceremony in Calgary, Canada.

Help us improve this page:   Correct or update the Russell Peters page