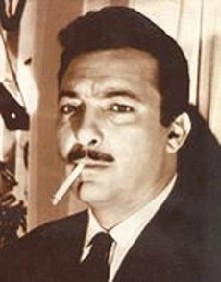 His full name was Rushdi Said Abaza, he was born to an Italian mother, Tereza Luigi, and an Egyptian father who worked as a police officer.

Rushdi graduated from St. Marc College in Alexandria but did not complete his university studies.

In the year 1950, Rushdi moved to Italy to work in the cinema. Goffredo Alessandrini, a Famous Italian director directed Rushdi second movie Amina or Aminah and tried to help him there but with no luck.

During the six months he stayed in Italy, he was given only minor parts.

He did not fare any better in the cinema on his return to Egypt, so he turned into other things, such as working in the Suez Canal and buying a restaurant. But his love for the cinema was overpowering and he returned to it again, starting at the beginning this time.

Rushdi accepted small parts that matched his ability and experience.

Rushdi Abaza career was rich and complex. He reached the peak of his career in political films such as Jamila the Algerian, A Man in Our House, No Time For Love , Sunset and Sunrise , Something in My Heart and Behind the Sun. He also played some situation comedies in the films Wife Number 13, Beware of Women, For a Bunch of Children, and Half an Hour of Marriage.

Roushdi Abaza died in 1980 while making The Strong Men.

Help us improve this page:   Correct or update the Rushdy Abaza page