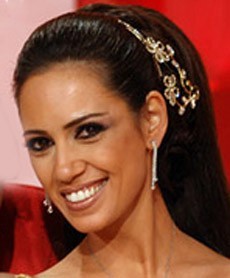 Rola was born in Mosul to a Lebanese mother and an Iraqi father.

Rola Bahnam started her career by working as a TV presenter at Future Television.

Later on she moved to the Lebanese Broadcasting Corporation - LBC where she presents the TV Show Ismeh We Naseeb - Perfect Bride.

In the year 1998, Rola Bahnam became one of the original members in the all girls band The 4 Cats.

This pioneer Lebanese Girl Band was created and managed by Ghassan Rahbani.

Help us improve this page:   Correct or update the Rola Bahnam page