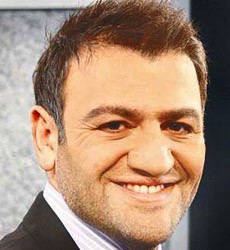 Robert was born in Zgharta in 1968 to Fouad and Olga (Maarrawi) Frangieh. He is the eldest of three brothers, Emil, Paul and Rabigh and one sister, Zeina. He studied at the Pere Carm School and Sanawiet High School, Zgharta; after which he attended the Lebanese
University, graduating in Lebanese Literature in 1992. In 1999, Robert, married, Nouhad Doueihy with whom he has 3 children.

His face became first known as a TV broadcaster on Orange Television - OTV, with "Khoudou khabaroun min nesswanoun” (Take their news from their wives), in which he interviewed the wives of famous Lebanese Politicians.

Robert then followed it up with celebrity news and interviews in Micro Scoop on the same station (with small sections presented by Serge Asmar). In June 2011, he came back with a new show called Face Et Profil

Help us improve this page:   Correct or update the Robert Frangieh page