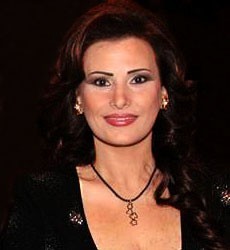 Rima Sayrafi is a Lebanese Journalist, specialized in writing social and artistic features in many arabic publications.

She is also a TV and radio presenter, working in Sawt Lebnen radio (93.3), and has a successful live show intiltled Abel Ma t3attem, broadcasted from monday to friday at 5:45 pm.

Her first major appearance on Television was when she took part as a member of the jury of a Talent show called Kaas El Nojoom which aired on the Lebanese Broadcasting Corporation - LBC back in the nineties.

Rima Sayrafi writes the pop news and gossip for many magazines and newspapers in Lebanon and the Arab World. Rima also works as a host and broadcaster on radio Strike.

Rima Sayrafi was on the jury of Mister Lebanon 2011, she is well known as Master Of Ceremony for many different events and festivals.

Help us improve this page:   Correct or update the Rima Sayrafi page