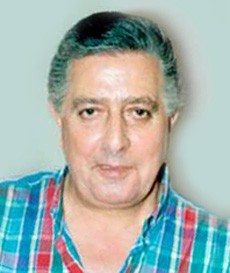 Sharara was a legend, he commented on more than one Olympic game. He was also a basketball player and a member Al-Ahly Club and Al-Jazira Club.

He enriched the sports library with a set of books and articles. He also worked in the Al-Akhbar newspaper. Riad commented and presented a number Egyptian sport games.

Riad Sharara worked in the written press (the press cultural) and in radio as a provider of many of the various programs, most notably in the airtime directly with a number media stars in the field of broadcast media mention of them, Eli Salibi, Souad Karout Alachi, Dr. Farouk Jamal, Mohammed Al Mashnouq and other famous authors.

He became popular on Television in the nineties after presenting a number of Television Game shows which were directed by Lebanese television director Simon Asmar.

He presented many games shows for many years with Mireille Mazraani, the duo kept the Lebanese viewers entertained for hours on Friday nights.

Sharara has has released a book of poems and followed it with his voice reading those poems.

Riad Sharara died in the year 1994 by the heart attack while presenting on stage.

Help us improve this page:   Correct or update the Riad Sharara page