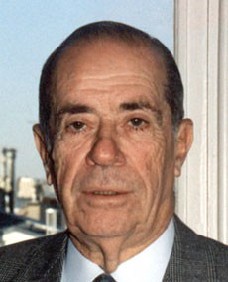 Raymond Edde also known as Raymond Eddé was a Lebanese statesman who served Lebanon for several years as a legislator and then later as a cabinet minister.

Eddé was the leader of the Lebanese National Bloc, an important political party in Lebanon.

Raymond Eddé was the son of former President Émile Eddé.

In the year 1958 Raymond Eddé was himself a candidate to the Lebanese presidency, but he did not make it.

People who supported Raymond Eddé always thought of him as the Conscience of Lebanon. Raymond Eddé was a true lebanese nationalist, who opposed the French Mandate, and the Syrian, Israeli, and Palestinian military intervention on the Lebanese soil.

Help us improve this page:   Correct or update the Raymond Edde page