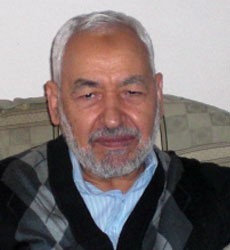 Rashid Al-Ghannouchi is an iconic Tunisian Islamist that represents a liberal and progressive strand in Arab Islamist politics.

Rashid Al-Ghannouchi, also written Rashid al-Ghannushi or Rached Ghannouchi, was born in 1941 in Qabis province (southern Tunisia). He received his higher education in Cairo, Damascus and the Sorbonne in Paris.

In 1981, Rashed founded the Al-Ittijah al-Islami (Islamic Tendency) which was renamed Hizb al-Nahda (or Hizb Ennahda) in 1989, which translates as the Renaissance Party. Al-Ghannouchi was at the forefront of resistance against authoritarian regimes in Tunisia since the early 80s. He was forced into exile to Europe, after numerous arrests in his home-country.

Following the Tunisia Protests of 2011 that toppled the regime of Zine El Abidine Ben Ali, Ghannushi returned to Tunisia from London.

Help us improve this page:   Correct or update the Rashid Al-Ghannouchi page