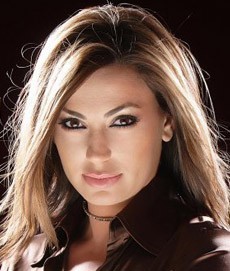 Rania Sabeh is a famous Model and Television presenter, became mostly popular for presenting Akher Al Akhbar, a music news show which airs on Rotana Music Television and which features news about singers, actors and celebrities from the arab world.

Rania started modeling when she was only fifteen years old, since the year 1998 she started working professionally by working as a model and taking part in modeling for celebrity Lebanese and International designer houses.

In the year 1998 Rania Sabeh acted in Abwab a famous Fawazeer show which aired during Ramadan on ART Television.

Rania also played the role in Layla in the video clip of Ana Wa Layla for Kazam El Saher.

Rania started her work in Television by working with ART Music as a presenter during the year 1999. She first appeared during the live musical program called Ihdaat. She also presented several festivals such as Hala Febrayer which took place in Kuwait, She also presented during Canne Festival and Sharem El Sheikh Festival which takes place every year in Egypt.

Help us improve this page:   Correct or update the Rania Sabeh page